During this festive season I would like to take a break from recipes and touch upon the food that is enjoyed by Bengalis, not just in West Bengal, but all over the world during Durga Puja. Durga Puja is the time when we worship the Mother Goddess and celebrate the bounties of Mother Nature; and what does Mother Nature gives us? Food of course. Since this is a food blog I will not go into details of the festival but just touch upon the food. 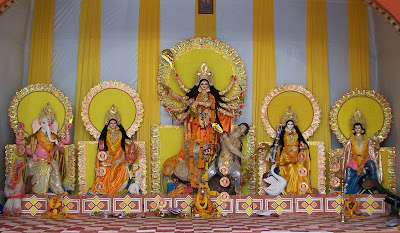 Essentially a festival which stretches into nine nights – hence the name Navratri --- and ten days, Bengalis begin celebrations from the sixth night by welcoming Mother Goddess Durga along with her children. It is a time for fasting and feasting. Bengalis all over the country and the world form groups and associations and organize Durga Puja. Since my exposure to Durga Puja celebrations is restricted only to the city of my birth, Bombay (now Mumbai) I can only describe the foodie delights of the festival in Mumbai.
Many, many years ago when there were only a few hundred Bengalis in Mumbai the first Durga Puja started on a small scale in south Mumbai. As the decades passed and we moved into the 21st century the number of Bengalis grew and so did the scale and number of Durga Puja celebrations. Away from their homeland one thing that I have noticed is the craving for that taste of Bengal amongst the migrant Bengalis. Restaurateurs with unfailing regularity descend on the city from West Bengal with their bags of goodies. Some of the restaurateurs also have establishments in Bombay and put up food courts at the Durga Puja venues; notable among them is advertising professional and restaurateur Anjan Chatterjee whose food court – Pet Pujo --  is a major attraction at the Durga Puja organized by singer Abhijeet at Andheri a suburb in north Mumbai. 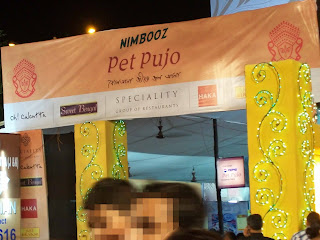 Entrance to the food court 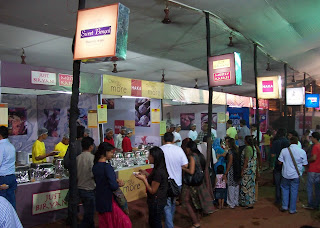 Inside the food court 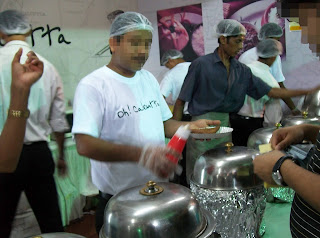 How about some ketchup with cutlets?
Needless to mention goodies are always not healthy --- lots of sweets and delicious fried stuff. With the older generation not so active and with the younger generation being short of time and sometimes not having the inclination to dish up Bengali delicacies, it is during this Puja that most Bengalis as well non-Bengalis who have developed a taste for Bengali cuisine, rush to the food courts of the various puja pandals.
A puja pandal is the enclosed place where the Puja is held.  A usual pandal has three sections. The pride of place is held by Ma Durga, then there is a section for entertainment; celebrities as well as non- celebrities entertain the guests here with songs, dance and plays. The third section has the stalls selling handicrafts, Bengali books, music, magazines, other knick-knacks and the all important food stalls. While the other stalls have over the years more or less disappeared the food stalls have only increased. What do you get here? Well, besides the usual cutlets, rolls, biryani, ice-cream and Bengali sweets, there are the Bengali favourites Mughlai paratha, mochar chop, luchi allur dom, hinger kochori, phulkopir shingada, baygooni. If all this sounds like Greek then here is the explanation; phulkopir shingada is nothing but samosas with a filling of cauliflowers and potatoes, a Bengali specialty; phulkopi is the Bengali word for cauliflower and shingada is samosas; Bengalis refer to samosas as shingada.  Shingada or Singhaara is what water chestnut is called in India, since samosas have a shape similar to water chestnuts Bengalis refer to samosas as shingada; I do not know how far this is true but this is what I read somewhere. Mughalai paratha is parathas with a filling of eggs and mutton mince; a point to be noted here is that the Bengali paratha is always made from maida (white flour). Luchi allur dom --- luchi is puri made from maida --- Bengalis never make the parathas and puris from whole wheat flour (atta) but always from maida (white flour) and allur dom is the Bengali version of dum alloo(potato). Kosha Mangsho is a special Bengali mutton preparation. Mochar chop --- mocha (no not the popular variety of coffee- coffee mocha) is banana flower. Ch is pronounced as in charter or chop. It is therefore a ‘chop’ made from banana flower. I do not know why it is called a chop; I think the word cutlet would be more appropriate. Baygooni --- it is not a goon who loves bay leaves but baygoon is what Bengalis call baigan(brinjal/aubergine) and baygooni is slices of brinjal dipped in a batter of besan (chickpea flour) and deep fried, heavenly and extremely sinful. Hinger kochori is kachori with a flavour of asafoetida. I plan to post some of these recipes later but now more about the Durga Puja food. 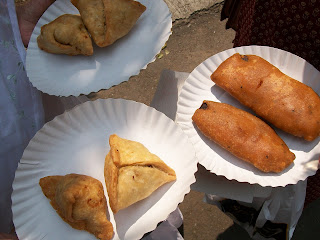 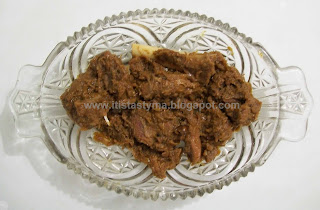 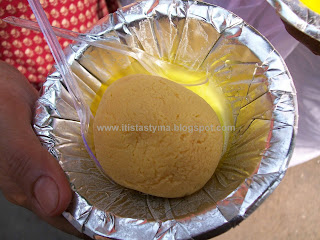 Rajbhog - A Bengali sweet with stuffing of pistachios
While you have to pay for the food at the food stalls what everyone looks forward to is the bhog which is distributed free for 3 or 4 days to everyone rich or poor irrespective of caste, creed, race or social status. It doesn’t matter whether you have contributed to the Puja fund or not. You can just walk in during bhog time and have a sumptuous and nutritious meal. Bhog is the offering to God. In the good old days when there were less people attending the Puja we had a sit down meal on plates made from the leaves of the teak tree. Then as the numbers increased sit down meals were abandoned and bhog was distributed in small bowls called dona also made from the leaves of the teak tree. 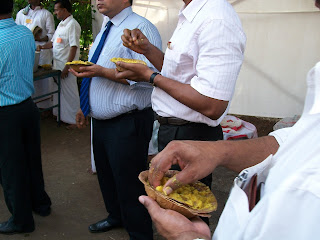 Bhog served in donas
Now once again, with more and more Bengalis organizing Durga Pujas it is back to the sumptuous meal at some of the venues. The only difference being, while in the past the meal was served to us as we sat down, now it is like a buffet meal at a wedding with volunteers serving you the meal as you hold out your plate. At the Durga Puja in Bandra (a suburb in north Mumbai) I noticed they were serving us the bhog in Styrofoam plates and at singer Abijeet 's Durga Puja it was being served on stainless steel plates. 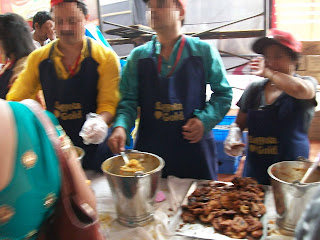 Bhog being served at Abhijit's Durga Puja. In the centre is the pile of baygoonis
Traditionally bhog comprises khichdi which is a mixture of rice and lentils. This is very delicious because the Bengali khichdi is a richer version of the khichdi normally associated with the meal given to convalescing patients. In Hindi films you will often here the doctor advising ‘zara khichdi de dena' --- (give khichdi to the patient); it better not be the Bengali khichdi which is anything but insipid. Then there is a mixed vegetable, a fried item, tomato chutney and a sweet dish, which is usually payesh  what non- Bengalis refer to as kheer. 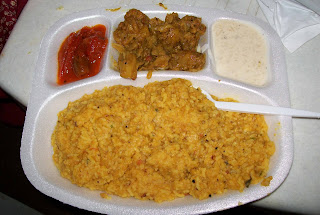 Bhog served at Bandra's Durga Puja. From top left, clockwise, tomato chutney, mixed vegetable, paayesh and khichdi
This was first time I had bhog at Abhijit’s Durga Puja and I found there was a delicious gulab jamun along with the paayesh. Incidentally the Bengali gulab jamun is quite different; Bengalis call it kaalo jaam  which means black jamun, so as the name suggests there is difference in the colour and also difference in the taste. While this is the standard fare with certain variations here and there, on certain days however the menu may change; for instance on the eighth day of Navratri on which day it is believed Ma Durga killed the evil demon, a special meal with pulao and delicious fried stuff is served at certain venues. The meal is vegetarian with no onion and garlic and always tastes delicious. I found the bhog served at Bandra very, very, tasty and though the khichdi at Abhijit’s was quite watery, the baygooni here was quite good. The coating of besan (chick pea flour) was thin just like the way my mum makes it 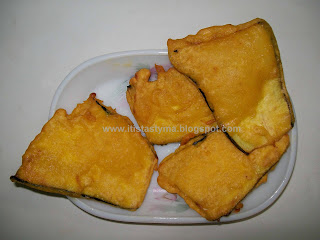 Baygooni made by my mum
and not thick like the one (see photo below) which was being sold at the Ramkrishna Mission which is located in one of the suburbs of Bombay and is also one of the places where Durga Puja is held. 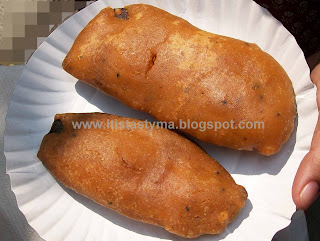 What I like best is the warmth of the organizers despite being perfect strangers they come up to you and enquire whether you are enjoying your meal for instance I was quite touched and surprised when Abhijit walked up to everybody including us and asked, “Is everything fine?” The young volunteers work tirelessly, but enjoy it; as these youngsters at Bandra who agreed to pose for my blog pointed out “We cannot describe how it feels; we look forward to these four days”. 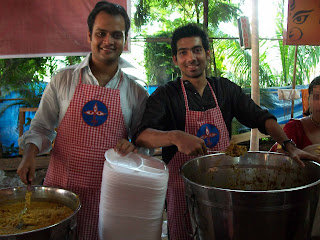 Volunteers serving bhog at Bandra's Durga Puja
This was about Bombay’s Durga Puja but I would love to have a firsthand view of how Bengalis celebrate the festival all over the world. I did find some images on you tube. There is an interesting one of Bengalis enjoying bhog in Singapore. Then there is a rather long and quite an informative video put up by the Bengali association of Glasgow. I leave you with some of these images as well as one of Abhijit’s Durga Puja.